WE’VE ONLY JUST BEGUN : A Celebration of THE CARPENTERS | CORK | MARCH 2022 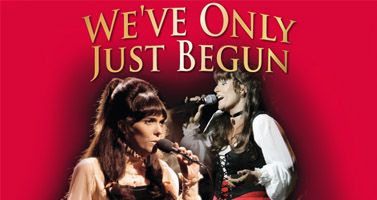 We’ve Only Just Begun : Celebration of The Carpenters, with Big Band

The touring show We’ve Only Just Begun has been on the road now for over 5 years and is simply the best celebration of The Carpenters music to be heard anywhere in the world. The show features every Carpenter hit embellished by a 10-piece big band and accompanying audio visuals of The Carpenters career highlights. It’s an evening of pure nostalgia where Toni Lee truly becomes Karen Carpenter.

Karen Carpenter had a unique voice, so unique in fact that it has proven almost impossible to duplicate its deep, smoky, emotional edge, creating that uniqueness that is so hard to perfect. Now, for the very first time in over 30 years, the voice that melted a thousand romantic hearts lives again through Toni Lee…

From start to finish Toni Lee made you believe she was Karen Carpenter. An absolutely fantastic show.” Ticketmaster Review.