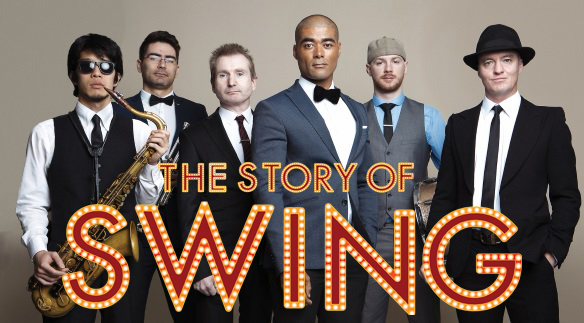 Luke Thomas & The Swing Cats bring their hit show “The Story of Swing” back to The Olympia Theatre on Sat April 20th, 2019. After a triumphant headline performance last year, Luke and the band have gone on to score a No.1 selling Album, a sell out Irish tour and have filmed their first TV special set to air later this year!

The Story of Swing… Performed by Luke Thomas & The Swing Cats!!
A musical timeline of swing classics from the 1920’s to the modern day. Featuring the music of Louis Armstrong, Fred Astaire, Bobby Darrin, Andy Williams, Luis Prima, Michael Bublé, Paolo Nutini and more… Also including original hit songs from their No.1 Album Dance With Me.

Never before has a show captured the full evolution of swing music like this. From its birth in the 1920’s to the big band era of the 30’s and 40’s. From the golden age of the 50’s and 60’s with household name’s like Sinatra, Bobby Darrin, Andy Williams to the +modern era of Buble and Nutini. Hear such classics as “King of the Swingers” “Puttin on the Ritz” “When The Saints Go Marching In” “Mack the Knife” “I Can’t Take My Eyes Off You” “Mr Bojangles” “New York, New York” and many more along with original hit songs from their No.1 selling Irish Album “Dance With Me” performed live by Luke Thomas & The Swing Cats! Do not miss one of the most exciting and in demand acts in the country right now!

The Swing Cats lead by award winning vocalist Luke Thomas have amassed a huge following throughout Ireland and Europe thanks to their distinctive sound and style which is steeped in the golden age of swing music. They have sold out almost every major venue in the country including The Olympia Theatre, Vicar Street and National Concert Hall. They can even count the President of Ireland, Michael D. Higgins as one of their biggest fans and have been requested to perform at his residence 4 times!