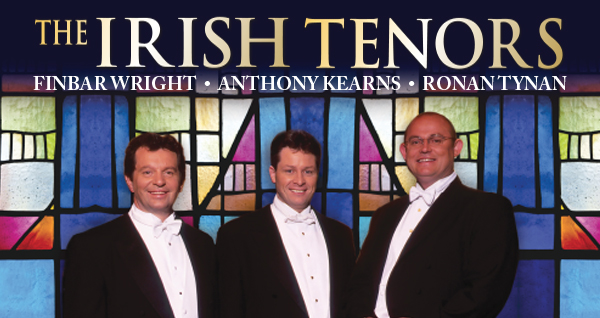 Finbar Wright, Anthony Kearns, and Ronan Tynan have been touring together as The Irish Tenors since 1999 with sold-out shows at Radio City Music Hall, Sydney Opera House, Carnegie Hall, The Hollywood Bowl, and major concert halls throughout the world. Their faces and voices are familiar to US audiences through several PBS specials, including the “Ellis Island” recordings that sold a million CDs and DVDs.

Since they first joined voices in 1999, The Irish Tenors have made countless traditional treasures breathe with new life. Moreover, they’ve proven themselves gifted interpreters of a wide range of material, with such songs as My Heart Will Go On (from Titanic), Fairytale Of New York and even Jimmy Kennedy’s South of the Border (Down Mexico Way). These songs live comfortably in their repertoire alongside Danny Boy, Whiskey in the Jar and The Fields of Athenry.

Among their best-selling albums, ‘Heritage’ ranks as one of the finest with classic recordings of many of the most beautiful Irish songs. The Irish Tenors will come home to Ireland for the first time since 2004 to play a very special series of concerts in January 2019 at the National Concert Hall in Dublin and the INEC in Killarney, Co. Kerry.