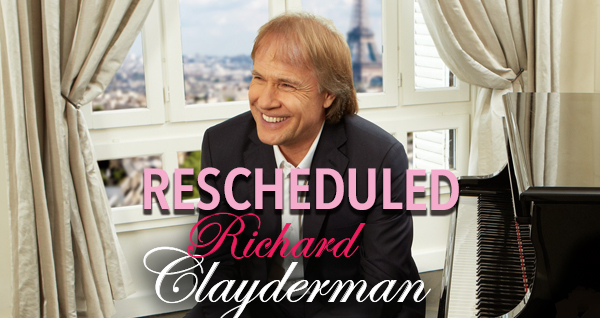 Rescheduled dates to be announced for 2022. Tickets purchased for Thursday 4 June 2020 and Wednesday 24 November 2021 will be valid for the rescheduled dates.

A regular visitor to the National Concert Hall the World’s most acclaimed touring pianist Richard Clayderman is delighted to announce the rescheduling of his Dublin concert date on the 30th September 2020. Clayderman was originally set to perform on June 4th 2020 but due to Covid 19 the date had to be put on hold.
“I am delighted to be coming back to Ireland and I sincerely hope all my Irish friends and fans can attend the new date.” said Richard yesterday.

Richard Clayderman, the Prince of Romance, has sold more than 85 million albums in a career that has brought him to every corner of the globe. ‘Ballad Pour Adeline’ alone has sold a staggering 22 million copies since its release. He comes back to The National Concert Hall for a very special show joined by the Romantic Rhapsody Strings and will play a selection of his best loved pieces. Richard Clayderman has arguably done more to popularise the piano than anyone since Beethoven. This is a show not to be missed.

Rescheduled dates to be announced for 2022. Tickets purchased for Thursday 4 June 2020 and Wednesday 24 November 2021 will be valid for the rescheduled dates.