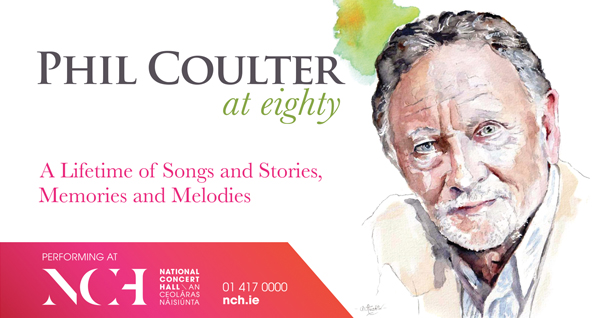 To celebrate his 80th birthday and fifty five years at the very top end of the music industry Phil Coulter is making a long awaited return to the stage of the N.C.H. This will be a show with a difference, a musical journey through the highs and lows of an always colourful career, from Eurovision winners to Bay City Roller smash hits, from Luke Kelly classics to all time piano favourites.Phil’s story telling has become one of the highlights of his concerts and this show will give him ample opportunity to regale the audience with some hilarious tales.  To add a new twist he has assembled a video compilation of some never before seen footage of his famous collaborators, from Liam Neeson to Billy Connolly. Priceless.Having played some of the most illustrious venues in the world, from Carnegie Hall to the White House, Phil is really excited to revisit the most prestigious concert hall in the country. “Can’t beat a home town gig”, he laughs.He’ll be joined on stage by some of his long time musical associates, virtuoso players,  and by Special Guests, outstanding young tenor GEORGE HUTTON, from Derry and by his lovely wife and mother of their six kids, GERALDINE BRANAGAN.A ‘one off ‘ evening not to be missed.