In Conversation with THE SOPRANOS | BGET | tba 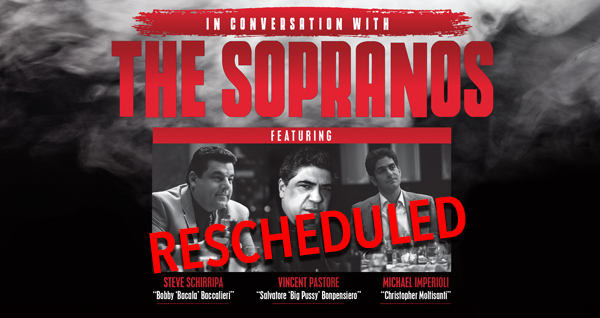 All tickets for the original event are valid for the rescheduled date.

Presented by Pat Egan in association with Roy Ortuso

“One of the richest storylines in television history” New York Newsday

Steve Scirrippa (Bobby Baccala), Vince Pastore (Big Pussy) and Michael Imperioli (Christopher Moltisani), three of the longest running actors in The Sopranos, are bringing to Ireland for the very first time, the story behind the most legendary show in television history.

Steve, Vince and Michael will deliver the stories behind the series, the incredible bonding of the talented cast as they matured with the show and their characters became so believable that people in the streets still call them by their character’s names.

Hear the stories of the friendships that developed between cast mates, including the impact that their on-screen capo, James Gandolfini, had on their careers and lives.

Get to know the people behind the characters as they invite the audience to ask questions with a fun-filled and informative Q & A at the end of the show.

All prices include a €1 facilities fee per ticket. Telephone & Internet bookings are subject to a maximum s/c of €7.15 per ticket/ Agents €3.40.

Tickets for the original date are still valid for the rescheduled date.