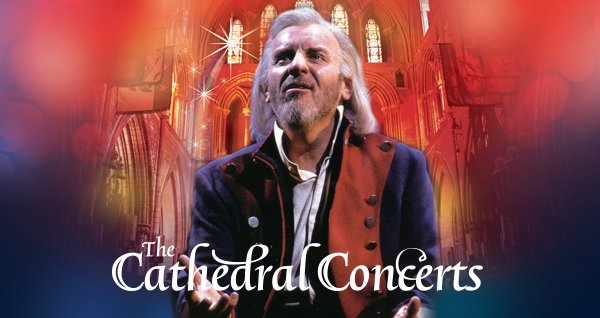 An Exclusive Gala performance at an iconic venue.

Colm Wilkinson, one of theatre’s most beloved voices, brings his legendary vocal talents to St Patrick’s Cathedral for an evening of unsurpassed entertainment. Colm will be joined on the night by The Arís Celebration Choir, the O’Neill Sisters and Rachel Coyne.

Tony, Drama Desk and Olivier nominated, Colm Wilkinson has been honoured with Helen Hayes, Theatre World and Dora Mavor Moore awards. Theatre lovers around the world need no introduction to the man who has defined modern musical theatre, originating such roles as Jean Valjean in Les Misérables and the Phantom in The Phantom of the Opera. Colm Wilkinson’s voice will enrapture and captivate audiences from experienced musical theatre aficionados to new generations.

The concert is an evening of music and stories. Theatre favourites such as “Music of the Night”, “Some Enchanted Evening”, “Somewhere”, and his signature song “Bring Him Home” anchor the experience. Colm Wilkinson also includes definitive Irish classics in his repetoire.

What they say about Colm Wilkinson:

Sir Cameron Mackintosh
The day I first heard Colm sing the music of Les Misérables when he was auditioning for the role of Jean Valjean I knew that we had not only found our star but he had a voice from God like no other. He was also the first person ever to sing the title role of Phantom of The Opera which Andrew Lloyd Webber and I were staging as a private tryout prior to production. Though already cast as Jean Valjean Colm spoke enthusiastically about playing the Phantom, which he said appealed to him even more as the role was a bit shorter! Luckily for him I said no and the musical theatre benefited from two legendary performances.

Sir Tim Rice
I first noticed the outstanding talent of Colm Wilkinson when he knocked the socks off audiences in the original West End production of Jesus Christ Superstar. Andrew Lloyd Webber and I then nabbed him speedily to be the first ever Che Guevara in our original studio album of Evita. Since those days many many others have recognised his extraordinary gifts and he has conquered the world in countless other ways, annoyingly not often enough in my shows. No-one could be more deserving of a tribute evening than Colm.

Lord Andrew Lloyd Webber
“I have known Colm for many years. He was the original Che on the album of Evita and probably less known is that he was the first person to play the role of the Phantom at Sydmonton, my country home, when the show was in embryo. I would have offered him the role had it not been that he was already committed to play Valjean in Les Miserables!

Sir Trevor Nunn
I first heard C T Wilkinson on the original recording of Jesus Christ Superstar, and not long after that thrilling experience, Colm’s arrival revolutionised the score of Les Miserables. Nobody can ever completely equal his achievement as Jean Valjean … with his miraculous voice, and his utterly committed acting performance amounting to the jewel in the glittering crown of his brilliant career. But how can it be that such a colossus of musical theatre is such a generous, caring, modest, funny, lovely man? I thank my lucky stars that I met you Colm and have had the extraordinary privilege of knowing you over so many years. Colm Wilkinson Superstar.

Claude-Michel Schönberg
When we played to the company the new song “Bring Him Home” written for Colm’s incredible falsetto voice, a member from the company told the director Trevor Nunn: “You said the show was about God but you never said that God will sing in the show !”

Eddie Redmayne
I will never forget the moment Colm walked onto the set of the Les Miserables film. All of the other actors, having grown up being beguiled by his staggering talent, were silenced. Completely silenced. Everyone just sort of stood there with dropped jaws. De Niro had walked in. That’s it, Colm is the De Niro of the Musical Theatre world. He inspired us all through the filming process with kind encouragement, overwhelming generosity and his rockstar spirit and I am so thrilled that with these scholarships he will continue to inspire another generation.