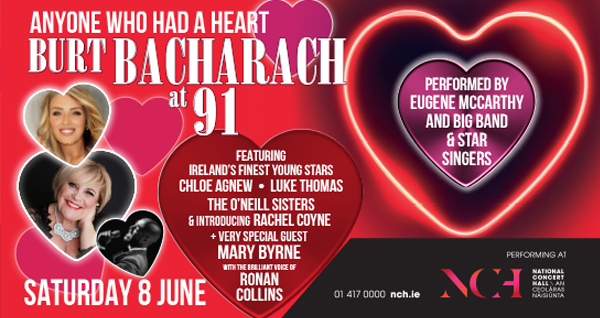 Burt Bacharach wrote some of the greatest pop songs ever …. Walk on By, Raindrops Keep Fallin’ On My Head, I Say A Little Prayer, Do You Know The Way To San Jose, Arthur’s Theme (Best That You Can Do), On My Own, Alfie, What’s New Pussycat, You’ll Never Get to Heaven, Always Something There To Remind Me, Anyone Who Had a Heart, Close to You, 24 hours from Tulsa, I Just Don’t Know What To Do With Myself, Make It Easy on Yourself, Magic Moments, Don’t Make Me Over, Wishing and Hoping, Wives and Lovers, A House Is Not a Home …the list is endless! Add in movie soundtracks for films like Butch Cassidy & The Sundance Kid, Alfie, Arthur and many more and you realise that Burt Bacharach is one of the most important songwriters of his, or any other, generation. His songs have been recorded by a who’s who of the music business….Tom Jones, Dionne Warwick, Gene Pitney, Michael McDonald, Perry Como, Dusty Springfield, Neil Diamond, Christopher Cross, Rod Stewart and many others.

With EUGENE McCARTHY (Musical Director) and his Big Band and Singers.