Pat Egan has worked with many music industry greats, from Lynott to Clapton to George Martin, but rarely steps into the limelight. He did, however, take time out from organising the proms at Dun Laoghaire pier to talk to Liam Collins

Pat Egan is one of those guys who seem to have been around forever, but unlike the acts he promotes he rarely steps into the limelight himself.

“I don’t normally do photographs,” he muses. “At nearly 70 I don’t know why I am still doing this.”

‘This’ is promoting showbiz acts, concerts, tours, something he’s been at since he left school at 13 with little or no formal education, to pursue the dream, which in the summer of love 1966 was to be a DJ on Radio Caroline.

He never quite made it in that department, but back in Dublin Pat got involved in the music scene as owner of a seminal record store, writer of an influential rock column and with a chance to get in at the deep end promoting his own concerts and tours.

Most of those early deals were hammered out over bottles of red lemonade on a Monday night in the TV Club in Harcourt Street, Dublin, where various bands got to play and the “heads”, meaning the managers, stood at the back of the hall cooking up ways to make money out of the music business.

When you get him to talk, which isn’t always easy, his conversation is peppered with names from the rock ‘n’ roll hall of fame he brought to Ireland in the heyday of the teenage revolution. Some, like Phil Lynott of Thin Lizzy, Rory Gallagher, Billy Connolly and Eric Clapton, became friends.

Others he just still shakes his head in wonderment when he thinks back.

It was, he recalls, a time “when you were allowed to make money in the industry.”

For most of his life Egan has been the nimble one, finding the gaps left unfilled by the likes of Jim Aiken or MCD.

Now, facing the age of 70 in 2016, Egan is still trendy, he dresses hip, speaks quietly and observes. That’s what managers do. 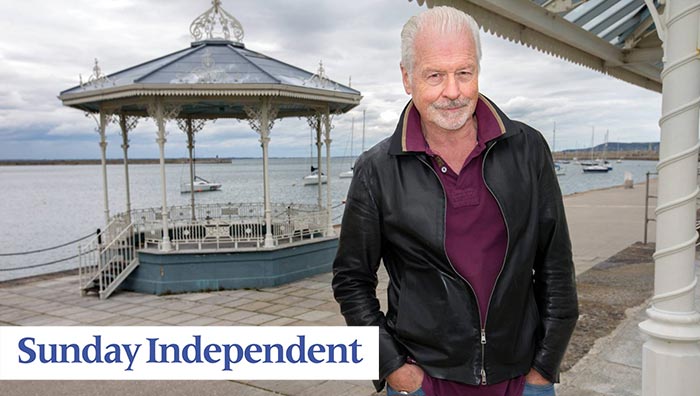 Pat Egan pauses on Dun Laoghaire Pier, near where “Proms on the Pier” will take place

But he also remembers some of the hedonistic days going to London and ending up in the Playboy Club, where thousands of pounds might be dropped by some during a night of Champagne and other delights. Or going to a party thrown by Phil Lynott in his flat and finding everybody stoned for the first time. “I was lucky that I never got into that,” he says.

He remembers meeting Lou Reed at Dublin Airport whose immediate and only preoccupation was to take a walk on the wild side and pick up a hooker before going to his hotel.

Egan pioneered music in venues like The Stadium on Dublin’s South Circular Road, which was really a boxing arena. Despite the fact that the acts had to keep turning to face difference sections of the audience, as the stage was in the middle, it was a time when fans got up close and personal with acts like Clapton The Hollies, The Who, Gene Pitney, Rory Gallagher and other icons.

“Rory was a unique guy, he just lived to play and drank too much whiskey” he says.

He brought Queen (1979) to the Simmonscourt arena in Ballsbridge and promoted what were probably the first ‘stadium concerts’ – in Dalymount Park, featuring Bob Marley (1980) and Status Quo the following year.

“In those days, there was no such thing as a licence, he says, recalling the Garth Brooks debacle. “We didn’t tell the guards in Mountjoy Square about the gig until two days before, but there was never any trouble – apart from guys printing counterfeit tickets and ripping me off.”

Another well-known promoter, Oliver Barry, bankrolled his first real business venture when he opened the Sound Cellar record store, at the end of Grafton Street, which became a mecca for the new music.

“At the time it took eight weeks to get records from London, so we had to find innovative ways to get them earlier than that. I started that in December 1969 and it’s still there. iT was a golden era from the 1960s to the 1980s, it was very creative and we had a great time.”

In some ways life has come full circle as Egan is now promoting the first ever ‘Proms at the Pier” a two-day festival of ’70s and ’80s music at the disused ferry in Dun Laoghaire on the last weekend in August, featuring two five-hour sessions with 10CC, Midge Ure, Bjorn Again, The Definitive Rat Pack, Air Supply, Johnny Logan, Toni Lee doing the music of Karen Carpenter, and Melanie McCabe. 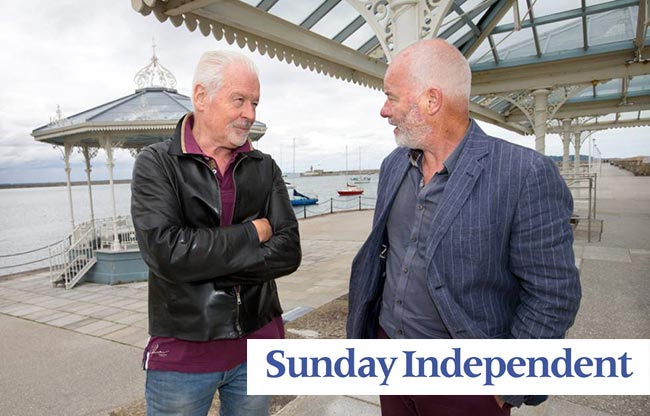 “Promoting is a mad business,” he muses, “but I just keep doing it. This is going to be two days of blatant nostalgia for people from 40 to 70. It’s for fogies like me. We’ll have Phil Coulter and his proms orchestra on both days and we’re hoping for the weather and a party atmosphere.”

He knows that when the kids go to festivals they don’t mind the rain, the mud and the discomfort. But this is a big production, costly to stage and the audience expects top-class entertainment and to be able to sit down, afternoon and evening, for their €49.50 daily.

“Sometimes I wonder why I keep doing this, but the pier became available and what else would I do?” asks Egan, looking over at the empty terminal and hoping that he can fill it on the last Saturday and Sunday of August.

Did he ever really enjoy a gig, I ask.

“Of course,” he answers, but not always. In particular he remembers dealing with Sir George Martin who, before the Sir came along, produced much of the Beatles music. “He was such a gentleman to deal with when I brought him over to Ireland and he was just so interesting to talk to.”

Managers and promoters are such a different breed. Egan may have introduced Rory Gallagher at certain gigs and brought Elton John to Ireland before he became a legend, but it is the detail of putting it all together that preoccupies him, rather than what the punter sees when a star walks on stage.

As we stroll along he agonises a bit about ticket sales for Proms on the Pier and the fact that the posters are not up around Dun Laoghaire to promote it. As I said, that’s what promoters do, they agonise and they observe.

But then he turns and looks over the harbour and says: “I’ve been lucky.”

When you look at the boy from Dorset Street, who went into a man’s world at the age of 13, now sitting into his Jaguar to drive back to the office, what can you do but agree?