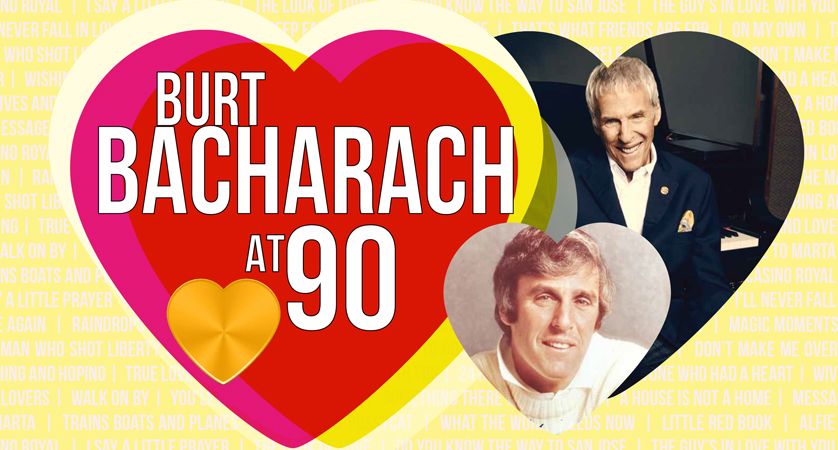 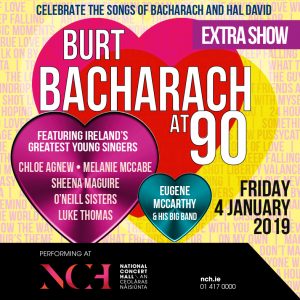 EXTRA SHOW: A Celebration of the Music of Burt Bacharach at 90
The National Concert Hall | Friday 4 January 2019, 8pm

Following the sell-out show in June at the National Concert Hall, Eugene McCarthy & His Big Band with special guest vocalists Chloe Agnew (Celtic Woman), Luke Thomas (The Swing Cats), Melanie McCabe (X-Factor), The O’Neill Sisters & Sheena Maguire return to perform their new arrangements of all Burt Bacharach & Hal David’s biggest hit songs and movie soundtracks, especially written for this show, to celebrate Burt Bacharach’s 90th birthday.
Burt Bacharach, the Hit Maker, wrote some of the greatest pop songs ever …. Walk On By, There’s Always Something There To Remind Me, Raindrops Keep Fallin’ On My Head, I Say A Little Prayer, Do You Know The Way To San Jose, 24 Hours From Tulsa, Arthur’s Theme (Best That You Can Do), On My Own, Alfie,  … the list is endless! Add in movie soundtracks for films like Butch Cassidy & The Sundance Kid, Alfie, Arthur and many more and you realise that Burt Bacharach is one of the most important songwriters of his, or any other, generation. His songs have been recorded by a who’s who of the music business …. Tom Jones, Dionne Warwick, Gene Pitney, Michael McDonald, Perry Como, Dusty Springfield, Neil Diamond, Christopher Cross, Rod Stewart, Elvis Costello and many others.